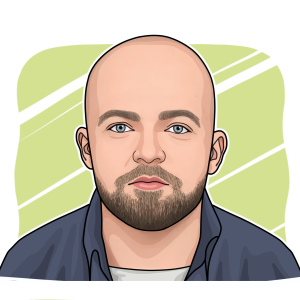 Methanol as an alternative to fuel

Methanol as an alternative to fuel: Introduction

In today’s world, human energy needs are constantly increasing, and  in the near future, an energy shortage or even an energy crisis is likely. Among the varied efforts being made to fulfill global energy needs, the energy transport by hydrogen and liquid biofuels like methanol and ethanol have become a great possibility in terms of sustainability and low environmental impact.

In the last few decades, important efforts have focused on the direct electrochemical oxidation of alcoholic and hydrocarbon fuels. Organic liquid fuels are characterized by a high energy density, while the electromotive force related with their electrochemical combustion to carbon dioxide (CO2) is comparable to the combustion of hydrogen  to water. Amongst liquid organic fuels, methanol has auspiciously characteristics in terms of low temperature reactivity, storage and handling.

Methanol is reasonable and may be distributed with current liquid fuel infrastructure. It can be obtained from fossil fuels, namely gas or coal, moreover as from sustainable sources through the fermentation of agricultural products and from biomass. Compared with ethanol, methanol has the main advantage of high selectivity to dioxide formation within the chemistry reaction method (electrochemical oxidation).

This paper aims to provide a clear picture of the present standing of methanol technology, with a specific target the technical advances, challenges, and prospects.

What is Methanol? What are its advantages?

Methanol has the potential to take on a leading role as a fuel, energy and chemical feedstock and thus decisively boost the energy transition. It is producible from synthesis gas based on natural gas or coal, or from carbon dioxide and the hydrogen produced from regenerative sources (e.g. from the electrolysis of water with solar or wind energy). The use of CO2 from the combustion of waste or biomass closes the carbon cycle. As a liquid, methanol can also be used as a form of transport for chemically bound energy.

Methanol has the advantage that it can be synthesized from relatively cheap feedstocks, namely carbon monoxide and hydrogen. It is one of the most economical synthesis resources. With an annual world production of about ten million metric tons, methanol is at the top of the list of lower alcohols.

Alcohols are compounds containing the monovalent hydroxyl group -OH bonded to carbon. They can therefore be thought of as being derived from hydrocarbons by exchanging hydrogen for hydroxyl.

Primary alcohols are thus defined by the general formula R-C-H2-OH , where R refers to any monovalent hydrocarbon radical. Containing only one carbon atom, methanol is the simplest of all alcohols.

How is Methanol produced?

Methanol is mainly produced by thermal processes that take place at high rates. Methanol can be produced from fossil fuels like natural gas, petroleum naphthas, and coal, as well as from biomass resources. In general, methanol production consists of three groups of unit chemical operations: 1) syngas production, 2) syngas upgrading, and 3) methanol synthesis and purification.

Today almost all methanol is produced from synthesis gas (syngas).

Both CO and H2 gases required for the synthesis of methanol are contained in the synthesis gas obtained by the action of steam on red-hot coke:

If a catalyst with a high activity is available, so that the highest possible setting of the reaction equilibrium for the carbon monoxide is ensured at low temperatures of approx. 260° C, then methanol synthesis is already technically optimal at low pressures of approx. 50-100 bar (so-called low-pressure process).

When a less active catalyst is used, correspondingly higher reaction temperatures of approx. 380° C and higher reaction pressures of over 300 atm (300 bar) are the starting point for methanol synthesis ( known as the high-pressure process).

The by-products of this reaction are dimethyl ether, methyl formate and higher alcohols, which are distilled off. As mentioned above, methanol synthesis is also carried out in a low-pressure process at 100 bar and 240-260°C, using a CuO-ZnO- Al2O3 catalyst.

Chemical use of Methanol

The worldwide use of methanol is for the extraction of formaldehyde (39%) and to a small percentage for the use as fuel (7%) (see Figure 1).

The chemical intermediates shown in the figure are then processed to produce many products in our daily lives (e.g., paints, resins, silicones, adhesives, antifreeze, and plastics). 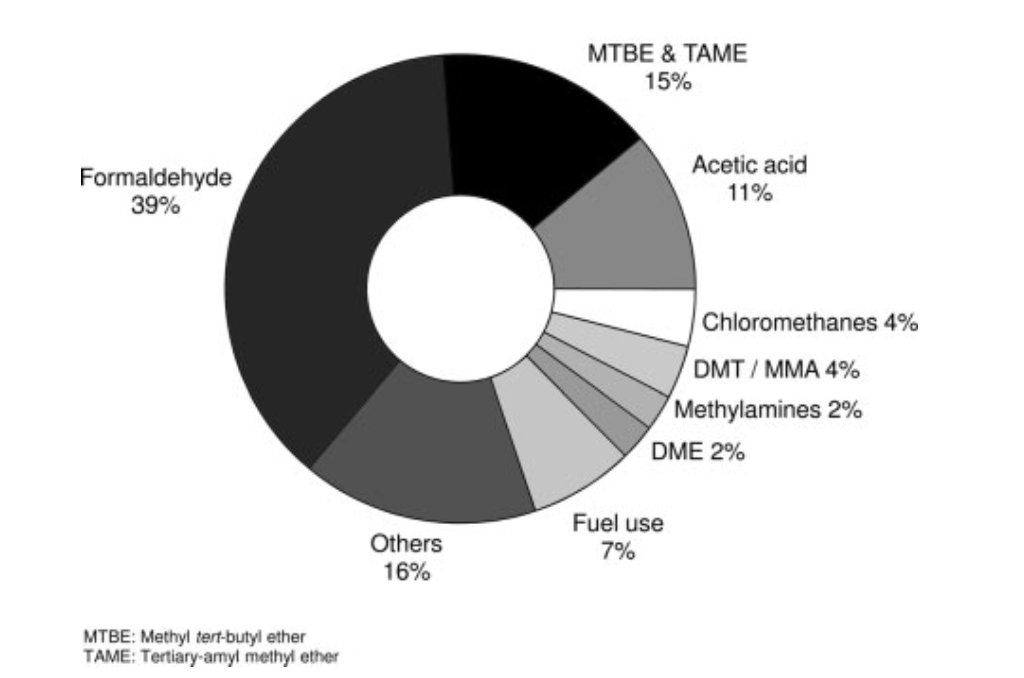 Methanol in the mobility sector

Methanol in the shipping industry

esearchers and developers are looking for alternative fuels for shipping.

For centuries, people have used the sea route to transport goods. In the beginning, sailing ships were the only link between continents. Today, huge cargo, container and cruise ships navigate the seas. They run on diesel and heavy oil.

In maritime shipping, methanol as a fuel is a new and as so far hardly tested concept. Nevertheless, there are successful role models.

Engines for the use of methanol have already been tested in various pilot projects for their use in ship operation. The engine manufacturers Wärtsilä, Scania, MAN and Caterpillar have the first technical designs and implementations of engines designed to run on methanol. This involves the provision of new types of propulsion systems, as well as possible engine modifications to the existing fleet of ships.

Engines for the use of methanol have already been tested in various pilot projects for their use in marine operations.

Spark ignition engines are produced as gas engines by Wärtsilä and Caterpillar, among others. Compatibility with methanol is indicated by the manufacturers. Pilot fuel (the addition of diesel fuel) is potentially not needed here.

There will also be a methanol-powered vessel sailing in the North Sea in the future. The research cutter “Uthörn” will be the first German seagoing vessel to use this environmentally and climate-friendly fuel instead of marine diesel or heavy fuel oil. In addition to its more modern equipment, the new 35-meter research vessel differs from the old Uthörn primarily in its propulsion technology. It will be the first German ocean-going vessel to be equipped with a methanol drive.

Although methanol as a fuel in ocean shipping is a new concept that has hardly been tested so far, there are successful role models. The Swedish Maritime and Inland Navigation Agency, for example, has equipped an existing pilot vessel with a diesel engine converted to methanol combustion in a pilot project and gained good experience.

In addition to these examples listed here, many other approaches are being tested that may be launched in the near future.

Benefits and disadvantages of using Methanol

It is estimated that the global shipping fleet was responsible for 3% of global carbon dioxide emissions in 2007 and is still growing. In order to reduce these emissions, it was proposed to use methanol as a clean and easy-to-handle fuel.

Taking into account the molar mass and calorific value, the emission of CO2 from methanol combustion is 20% less than from diesel fuels at the same power level.

Maritime shipping and port regions benefit not only from the fuel’s CO2 neutrality, but also from its clean, sulfur-free combustion. Due to the fact that ships also generate their own electricity at their berths by on-board combustion of the extremely sulfurous marine diesel, the air pollution for port cities is enormous. Methanol contains no sulfur, which means that no sulfur oxides (SOx) are emitted during combustion, unlike sulfur-containing fuels such as heavy oil.

Formaldehyde can be a by-product of the incomplete combustion of methanol. Formaldehyde or methanal is a colorless, pungent-smelling and highly toxic gas. Acute danger to life exists at a concentration of 30 ml formaldehyde per m3.

According to current technological standards, the filtering of formaldehyde with an oxidation filter is possible in principle.

As already mentioned several times, one advantage of methanol is that significantly fewer soot particles are released into the air during combustion than with gasoline, diesel or heavy oil.

One challenge, however, is that the energy density of the alcohol is only half that of diesel. This has consequences for shipbuilding: For example, the new “Uthörn” is getting significantly larger fuel tanks so that it can store enough methanol for a continued long range. In addition, the vent mast, which ventilates the engine room and other areas of the ship, will have to be around 15 meters higher than usual. The reason: if methanol ever leaks out, the special height is intended to prevent the methanol from starting to burn too close to the ship. Such “extras” mean that the methanol ship costs around one and a half million euros more than a comparable ship with conventional diesel propulsion.

Methanol as an alternative to fuel: concluding remarks

Methanol has the potential to be an excellent alternative fuel for vessels. It can be used in internal combustion engines as a blend with gasoline, as a pure fuel, or as oxygenated derivatives added to gasoline. Methanol can also be used in fuel cells.

Shipbuilders and operators around the world continue to search for environmentally friendly alternatives to conventional ship engines that run on heavy oil or diesel. Green hydrogen is also increasingly coming into focus as a clean energy resource. The concept involves refueling with methanol at the port. On board, hydrogen for the ship’s propulsion is obtained from the methanol by steam reforming. The advantage of this is that the ship’s propulsion is almost completely emission-free.

It is its potential versatility that allows methanol to seamlessly complement or replace petroleum and natural gas as the current leading feedstocks for organic chemical products.